Funded by the Orthopaedic Institute and the Midland Centre for Spinal Injuries (MCSI), Oswestry

The team has continued its work on identifying potential biomarkers in the bloods of patients following a spinal cord injury (SCI) to assist predicting clinical outcome. A paper from the group looking at routine bloods from a relatively small group of SCI patients has recently been accepted for publication in the Journal of Neurotrauma. Although this is great news, the team is now focussing its efforts on a much larger group of patients (>500) in addition to continuing its work on specific neurological markers that can also be assessed from blood samples. It is hoped that these biomarkers will be able to not only enhance the prediction of the patient’s neurological outcome but direct current treatments and rehabilitation regimes so that patients achieve their best clinical outcome.

Routine bloods and neurology scores from ~500 patients are currently being assessed.  These bloods will provide information on the patient’s general health and will include full blood counts, bone health measures, liver function, urea, electrolytes and inflammation levels. Neurology scores are also being collated from three time points; an initial (acute), one at approximately 3 months post-injury (sub-acute) and a third at approximately 1 year post-injury (chronic) and will provide data on sensory (pain and touch sensation) and muscle function (motor) in these patients.  In addition, information regarding the initial injury and any other factors that may influence the blood measures are being recorded. Using statistical techniques the data will then be assessed to determine its potential to predict neurological and clinical outcome.

Over the next 12 months we will be adding to the data already collected on specific neurological biomarkers such as S100 calcium binding protein β (S100β) (which is a protein secreted by cells of the central nervous system) and neurofilaments (important structural elements of neurons) in patient’s bloods and using statistical techniques to determine their potential in predicting neurological outcome in SCI patients.

Alongside this work, we are also using complex analytical techniques to try and identify new biomarkers that have not previously been investigated in relation to SCI. Compared to other medical fields, identification of biomarkers for SCI is relatively limited, therefore there is a possibility that new candidate biomarkers can be found to ensure that the most appropriate and effective biomarkers are being considered. To date, we have examined two different models of SCI in rats, mild ‘contusion’ injury and severe ‘complete’ injury. From these investigations we have identified a large number of proteins that are altered over time following a SCI, several of which are being further studied for their potential as biomarkers of SCI. Assessment of these proteins that change following SCI has also highlighted some of the biological mechanisms that might be altered in response to SCI, including ‘acute phase response signalling’, which may be targets for new therapies to dampen the bodies response to a SCI.

In the past year we have also been developing rat spinal cord slice culture model systems (Figure 1), once the culture has been fully optimised, a reproducible injury system will be devised which will allow for experiments investigating the effects of different targeted therapies on our SCI explant model. These could include experiments to target biomarkers identified form our proteomics/bioinformatics analyses. 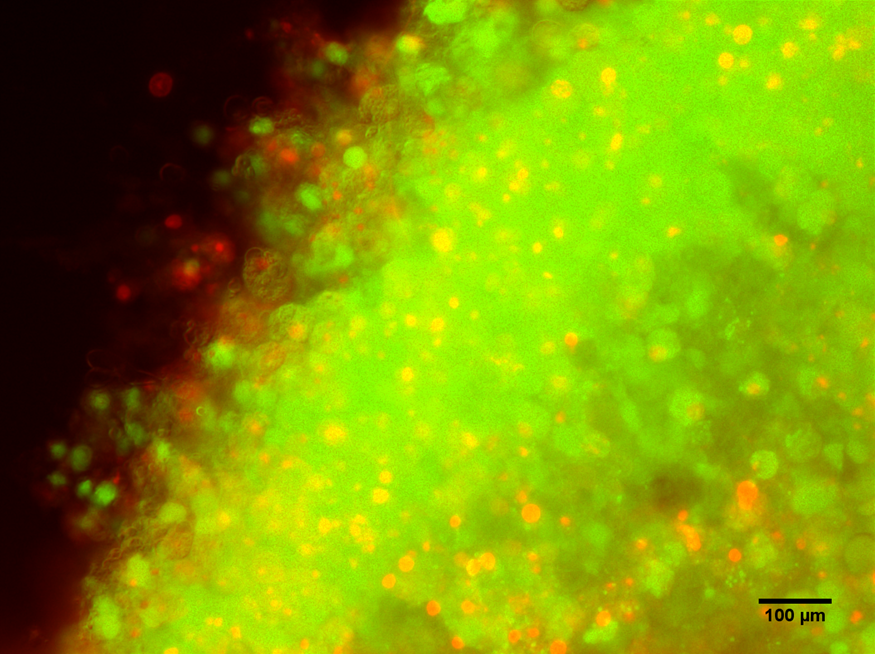