Are Primary Cilia involved in degeneration of the Intervertebral Disc?

Are Primary Cilia involved in degeneration of the Intervertebral Disc?

Funded by the Orthopaedic Institute and Institute of Liberal Arts and Sciences, Keele University

The primary cilium is typically seen as a small projection on almost all non-dividing cells. These organelles are increasingly being seen as ‘signalling hubs’ which are capable of responding to biomechanical stimulation but have many other proteins and receptors localised to them which are involved in a spectrum of cell signalling pathways. Defects in the primary cilium are associated with diseases termed ‘ciliopathies’ and recent work has shown that malfunctioning primary cilia are also present in conditions such as arthritis and alkaptonuria. Primary cilia consist of two main regions: a microtubule-based ‘axoneme’ surrounded by a membrane which is distinct from the cell’s plasma membrane, and a base (basal body) which is formed from the cell’s centrioles. Both of these structures can be detected via staining for specific proteins within them. The base of the primary cilium is linked to the cell cytoskeleton and is involved in the control of cell division whilst signalling proteins involved in the Hedgehog, Wnt and TGF cellular pathways are ’carried’ along the ‘axoneme’ via a unique transport system. Any changes to the primary cilium structure can result in impairment of its signalling functions.

Dr Sue McGlashan was awarded a Travelling Fellowship (Dec 2017 – Jan 2018) through Keele University’s Institute of Liberal Arts and Science, the purpose of which was to establish a collaboration between Dr McGlashan and Dr Sharon Owen. The primary goal of the visit, was to investigate, for the first time, primary cilia in pathological human intervertebral discs, thus combining Dr McGlashan’s expertise in the primary cilia field and the unique bank of intervertebral disc samples and cells held by the Spinal Studies Group from patients following surgery for a variety of back problems. Using a combination of methods and antibodies to the distinct structural elements of the primary cilium (axoneme and basal body) we were able to determine the incidence and length of primary cilia in cultured human disc cells and to identify them within pathological disc tissues.

Funding from the ILAS Fellowship enabled Dr Owen to attend and present the findings from both her and Dr McGlashan’s work at the Matrix Biology Society of Australia & New Zealand  meeting held at the University of Auckland during December 2018. Although visualising primary cilia structures in intervertebral disc tissue was difficult, due to the tissue being highly disorganised, aged and autofluorescent, some cilia were detected (Figure 3). In contrast, primary cilia were much easier to visualise in cultured disc cells and the presence of aberrant ciliary structures (16-44%) were found to be significantly greater (p<0.01) in human pathological disc cells when compared with ‘normal’ bovine disc cells (7-10%). Thus it appears that structural abnormalities in primary cilia are common in disc cells from degenerate human intervertebral disc cells. If these abnormalities contribute to impaired cilia function, do they also have a role in disc degeneration? If so, a novel therapeutic approach for restoring disc homeostasis may be through primary cilia manipulation. 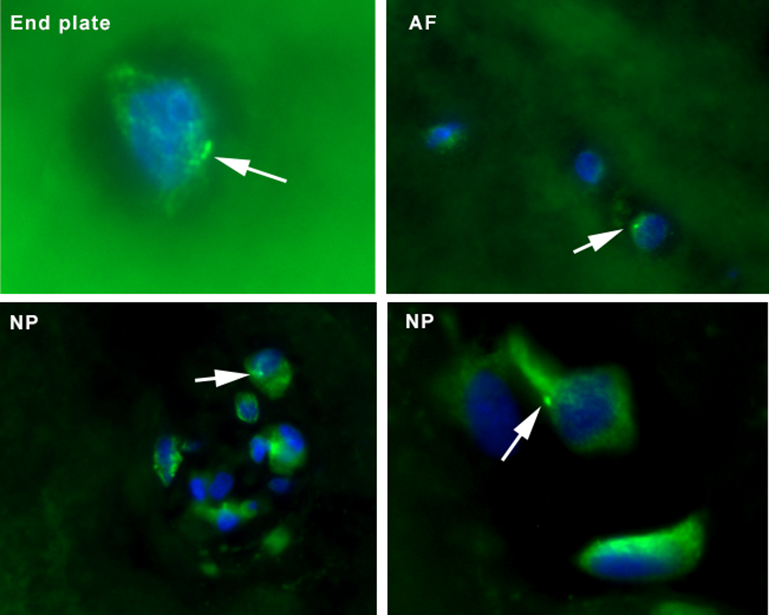