Funded by Orthopaedic Institute, Oswestry and Versus Arthritis

There are a number of factors that are suspected to influence the success of articular cartilage (AC) repair surgery. The research funded by studentship grant ‘RPG143’ sought to investigate two such factors, subchondral bone health and activity levels, using a variety of laboratory and clinic-based methods.

Initially, a Delphi consensus study among a panel of experts was used to identify research priorities in the cartilage repair field. The Delphi study highlighted factors that the panel agreed upon as being important in influencing the success of cartilage repair, some of which were used to develop or refine research questions for this thesis. The panel agreed that the subchondral bone (SB) was an important factor in cartilage repair and should be taken into account when planning therapeutic interventions, and that demographic and rehabilitative factors were also important factors.

The subchondral bone (SB) is intrinsically linked with the AC in the human knee, with the tissues forming an osteochondral unit, which has a well-established common biomechanical function. More recently, biochemical interaction between the tissues of the osteochondral unit has been reported and is thought to play a role in homeostasis and disease in the joint. In the first part of this study, we sought to investigate the effect of this crosstalk on AC repair. This was carried out using an in vitro model of the osteochondral unit, in which bone marrow-derived mesenchymal stromal cells (BMSCs) were used to represent the SB, and chondrocytes were used to represent the AC. The two elements of the model were indirectly co-cultured; separated by a porous membrane to prevent cell contact but allow for biochemical crosstalk between the cells (Figure 6).

The BMSCs used in the model were isolated from donor-matched regions of the SB that were deemed as ‘healthy’ or ‘unhealthy’ based on macroscopic and histological characteristics, to determine the differential effect of SB health on chondrocyte behaviour in the model. Chondrocytes were isolated from cartilage obtained from a young patient with no history of OA and were suspended in agarose to form a cell-loaded construct. Biochemical, histological and gene expression analyses of these constructs, after three weeks of culture, demonstrated that the co-culture of chondrocytes with ‘unhealthy’ BMSCs led to the decreased expression of genes encoding cartilage-specific proteins (collagen type 2 and aggrecan) and an associated decrease in the production of glycosaminoglycan, compared to those cultured with ‘healthy’ BMSCs. Although this work was performed in vitro, there are clear implications for cartilage repair by cell-based tissue engineering, in which the health of the SB underlying the repair site may influence the composition, and therefore properties of the repair tissue.

A number of published studies have suggested that post-surgical activity levels also contribute to the outcome of cartilage repair surgery, reporting that patients who are more active in the post-operative period are more likely to demonstrate clinical success. Psychosocial factors have also been reported to influence functional outcomes of knee surgery, in addition to also influencing activity levels. In the second part of this study, research was carried out to characterise the relationship between activity levels and knee function, in a cohort of patients undergoing cell therapy treatment for AC lesions as part of the Autologous Chondrocytes, Stem Cells or the Two (ASCOT) trial. The influence of ‘affect’, a psychosocial construct that indicates how an individual experiences emotion, and is separated into positive affect (PA) and negative affect (NA), was also investigated. Data was collected at baseline (immediately before cell implantation) and then at 2-, 12- and 15-months post implantation and consisted of activity data (the Human Activity Profile), knee function data (the Lysholm Knee Scoring System) and affect data (the Positive and Negative Affect Schedule). We were able to demonstrate that there was significant variation between patients in the relationship between activity levels and knee function, and that this variation was partially explained by the patients’ NA score (Figure 7).

Additionally, the patients’ NA score was found to be the best predictor of the primary outcome of the ASCOT trial, the 15-month Lysholm score, even when a number of other demographic factors were taken into account. The results of this study led to the development of a further observational study using wearable activity trackers and phone application-based knee function and psychosocial scores: ‘Characterising the relationship between Activity Levels and Knee function (ChALK)’. 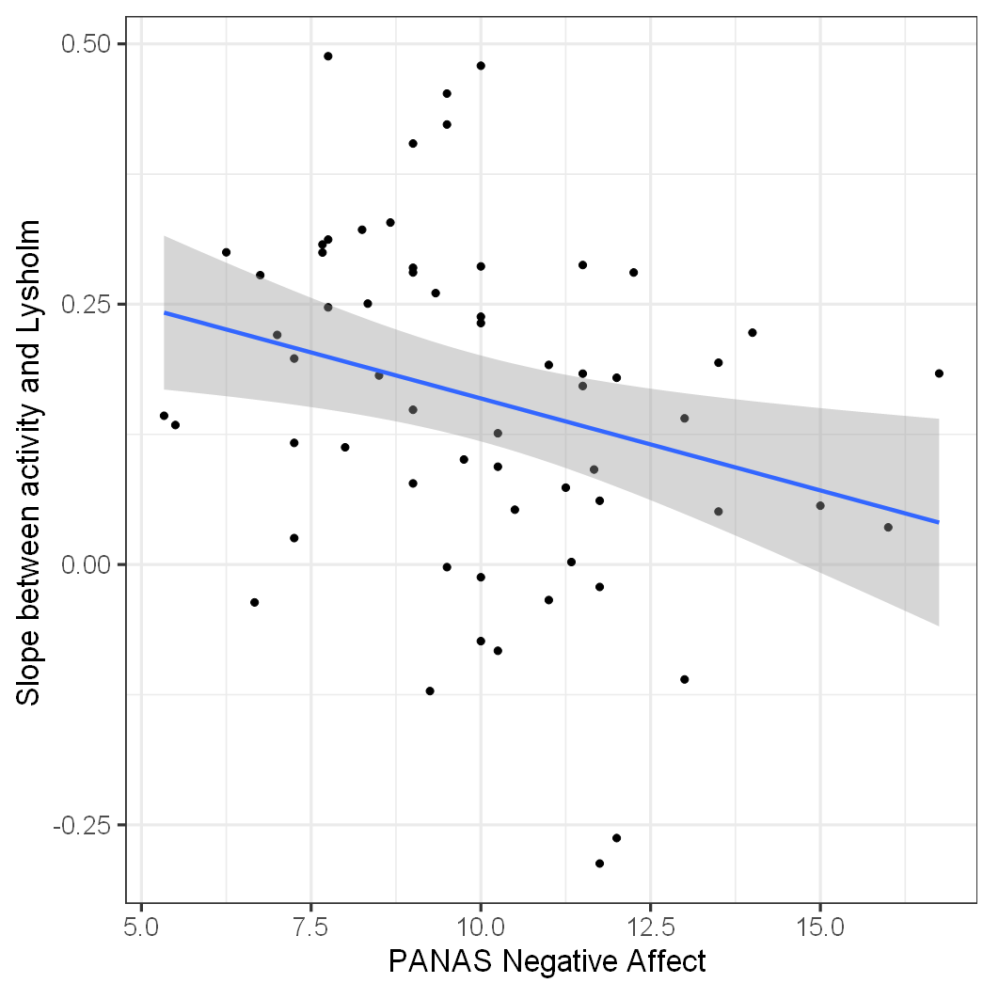 Figure 7:  Scatter plot to demonstrate the correlation between individual patient slopes and NA scores: Slope was used as a measure with which to summarise the relationship between activity levels and knee function at baseline, 12-month and 15-month follow-up. The correlation of this summary measure with mean NA was assessed using Spearman’s rank correlation. Slopes created from these three timepoints, and mean NA were significantly correlated: Spearman’s rho=-0.37, p=0.0028.