Autologous chondrocyte implantation (ACI) has been approved by NICE for its effectiveness in treating cartilage defects. We reviewed 19 patients who had undergone ACI together with meniscus allograft transplant (MAT), and 8 patients who had undergone ACI and Actifit® meniscus scaffold replacement in our hospital. We found both groups were effective in improving patients’ symptoms and knee function according to one-year post-operative assessments.

One year post-op biopsies also demonstrated that there were viable cells present in the allograft (Figure 3). The multilevel modelling showed the pre-op Lysholm score had a positive impact on patient outcome, whereas the graft type did not affect the post-op function score. 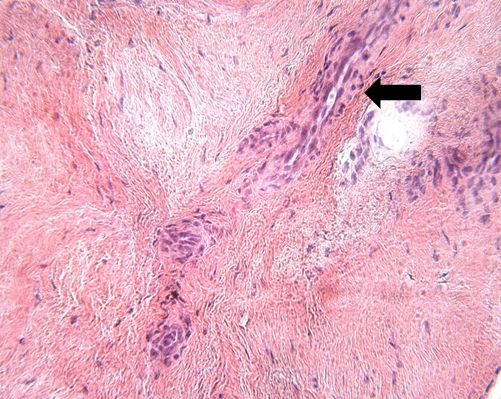 H&E staining of a one year post-op biopsy demonstrate the organization of fibrocartilage, which was well populated with viable cells and blood vessels (arrow).