Tendon grafting and tendon transfer surgery are common hand procedures at our hospital. Tendon grafting can be necessary following a severe tendon injury and involves replacing part of the patient’s tendon with a donor tendon. Tendon transfer surgery can be used following nerve palsy, where the loss of control over a muscle has caused lost movement and function. Tendon transfer relocates the insertion of a functioning muscle-tendon unit to the tendon whose muscle control was lost, thus restoring function and movement. Both types of surgery rely on joining two tendons, normally using some form of suturing.

Immediate movement of the hand following surgery is important as it allows patients to start rehabilitating and adapt to the graft or transfer. Early rehabilitation prevents adhesions, gives earlier restoration of function and eventually results in a stronger tendon with improved vascularity. Of course the repair needs to be strong enough to withstand the mechanical loads during rehabilitation. Traditionally, tendons are joined using the Pulvertaft weave (PTW) technique. This relatively complicated technique involves first weaving the end of one tendon through slits in the end of the other tendon, before suturing them. An alternative is side-to-side (STS) repair, which involves simply laying the ends of the two tendons side-by-side and then suture them together. Several studies have compared the strength of PTW and STS and found that STS is stiffer and has a higher load to failure. However, PTW seems to work under physiological loading conditions, which are typically low intensity cyclic loads.

We therefore performed an experiment to find out how tendons joined using either of the repair methods behave when loaded cyclically at physiological levels. For this we used flexor tendons from pigs, which we cut through and then joined using either of the techniques (Figure 1). We then placed the samples in our materials testing machine (Fig. 2) where we first loaded them cyclically to mimic average rehabilitation loads measured in humans. Next we loaded them cyclically using the largest rehabilitation load measured in humans. If they had not failed at this stage, we pulled them slowly apart to find how much force they would take before failing. We considered them failed if the elongation of the tendon was above 25mm.

Given these results, it should not surprise that the mean force to reach 25mm of elongation was much (four times) larger for the STS samples than for the PTW samples. We therefore concluded that although the PTW joining technique is probably sufficient strong for the average patient, some patients will generate large enough forces to damage the connection. Therefore the STS technique is the safer choice. Moreover, the STS technique is less complicated.

Being able to replace painful hips and knees by artificial joints is one of the success stories in orthopaedics. It is therefore no surprise that the main clinical activity of our hospital is joint replacement surgery. However, over a period of 20 years between 15 and 20% of the implants need revision, mainly because they have loosened and caused resorption of the surrounding bone.

Traditionally, radiologists and clinicians use X-rays to decide if there are bone defects around a prosthesis and how much bone has been lost. However, an X-ray is a 2-dimensional image and does not always give a clear impression of how much bone was lost. A computed tomography (CT) scan is a 3-D image and should give a better impression of how much bone has resorbed around a knee or hip prosthesis. More and more therefore, radiologists try to use CT-scans for this purpose but unfortunately the X-rays used to build a CT scan cannot penetrate the metal from the prosthesis. As a consequence, the CT scan contains “metal artefacts” that mask the bone defects.

Manufacturers of CT scans try to help radiologists by designing software to remove the metal artefacts and improve the image quality. However, different manufacturers use different software, which makes it important to compare between scanners. We therefore tried if we could make a “phantom”, which is an artificial bone with a hip or knee prosthesis inside it surrounded by various-sized bone defects. Such a phantom can be taken to hospitals or manufacturers to assess if the CT scanners correctly visualises the defects.

We managed to make two such phantoms, one for a hip replacement and one for a knee replacement (Fig. 3). Both were very inexpensive (below £50 each) and could be easily transported to other sites. The CT images allowed us to compare image quality between scanners, just as we hoped (Fig. 4). We recently published a paper about the knee phantom, and several people already asked for a copy of the paper so they could also make their own phantom.

Our hospital is at the forefront of the clinical use of cell therapy in orthopaedics. We are heading a number of clinical trials in this area, and have collected a large amount of clinical data. Cartilage defect patients are treated using Autologous Chondrocyte Implantation, whereby cartilage cells (chondrocytes) are isolated from a small biopsy and expanded in our OsCell cell manufacturing facility, eventually yielding between 1 and 20 million cells. These cells are implanted into the defect, after which they grow new cartilage. At the moment, we are conducting a clinical trial (ASCOT) to find out if it is best to use cultured chondrocytes, cultured mesenchymal stromal cells or a combination of the two.

An important problem with our mathematical model is that it does not account for differences between patients. Nevertheless, perhaps the results from our ASCOT randomised controlled trial will tell if the model predictions turn out correct.

This year saw our department again put much effort into statistical advice and analysis. This helped in the design and successful funding or ethical applications of several new clinical studies or trials, and in the analysis and publication of several completed studies. One example is a report on a discontinued multicenter clinical trial comparing between bracing and sling to treat shoulder dislocation. We decided to stop the trial early because recruitment had come to a halt, but were still able to draw the meaningful conclusion that bracing would be unlikely to provide the clinical benefits it was supposed to.

Another example is a Cochrane systematic review and meta-analysis of trials on the effectiveness of Gonadotropin-releasing hormone (GnRH) to treat the symptoms of premenstrual syndrome (PMS). We found good evidence that GnRH is indeed effective, but it can only be used for a short time. If longer relief is desired, progesterone must also be taken regularly. Evidence around the effectiveness of GnRH plus progesterone is however weak. Finally, we managed to find predictors of the long-term clinical outcome of Autologous Chondrocyte Implantation (ACI) to treat cartilage defects. We found that the long-term pattern of clinical outcome of ACI could be predicted from three characteristics: the clinical score before the operation, having a patellar or tibial defect, and having two or more defects.

BACK TO BIOMECHANICS & ORTHOPAEDIC INTERVENTIONS 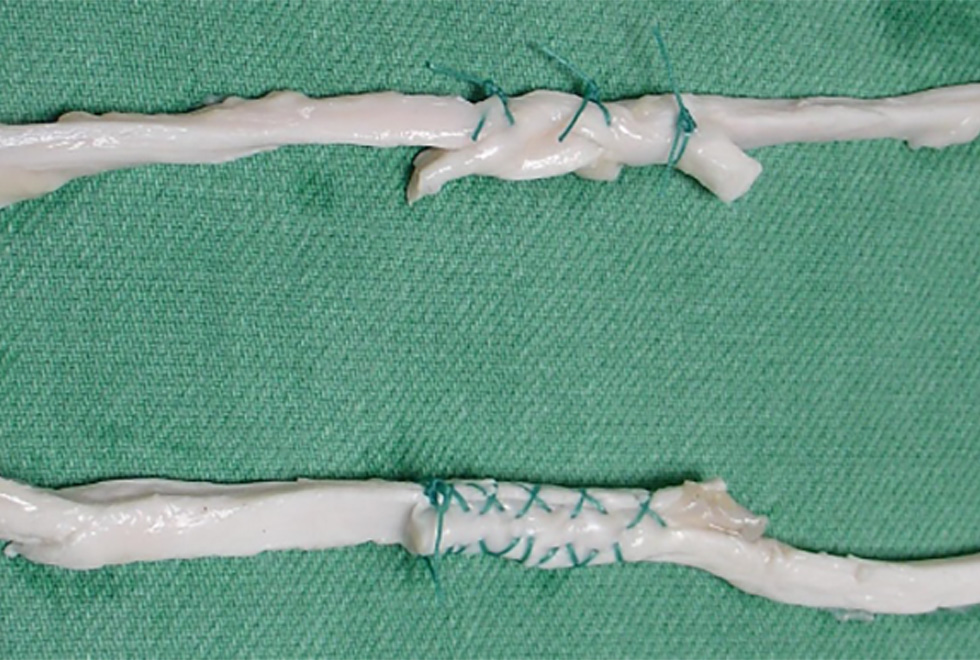 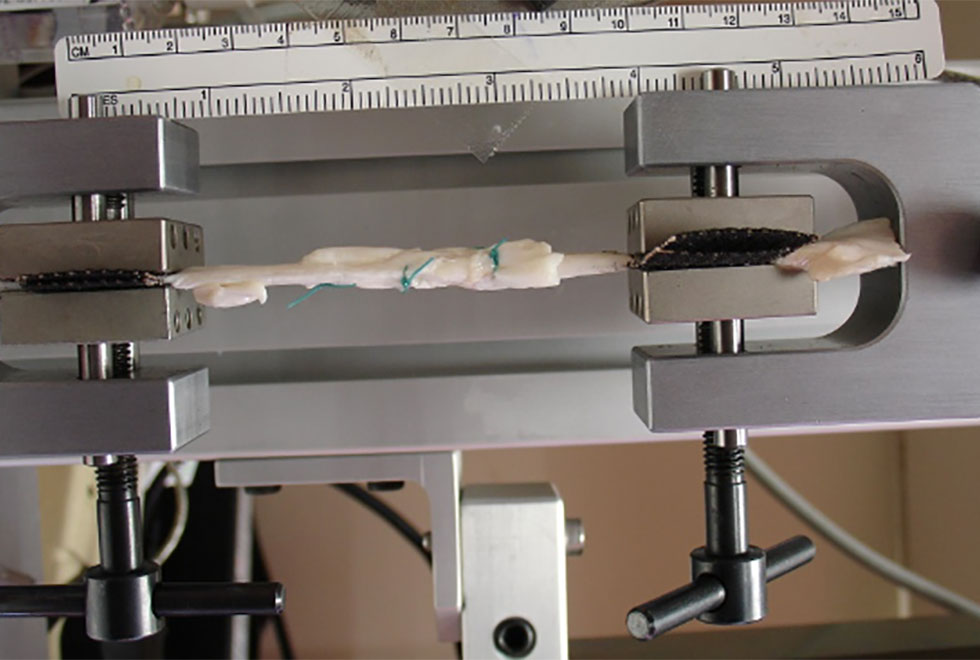 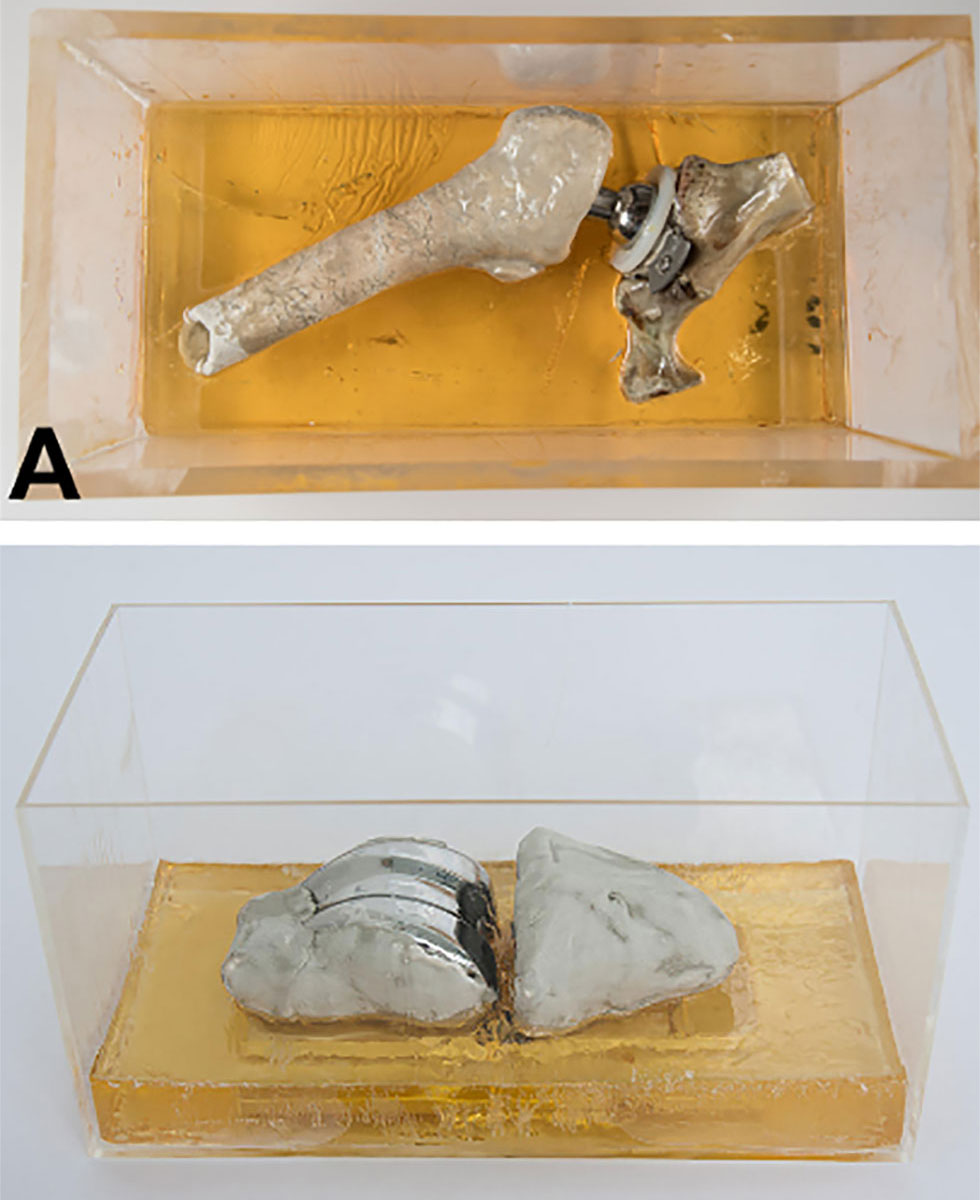 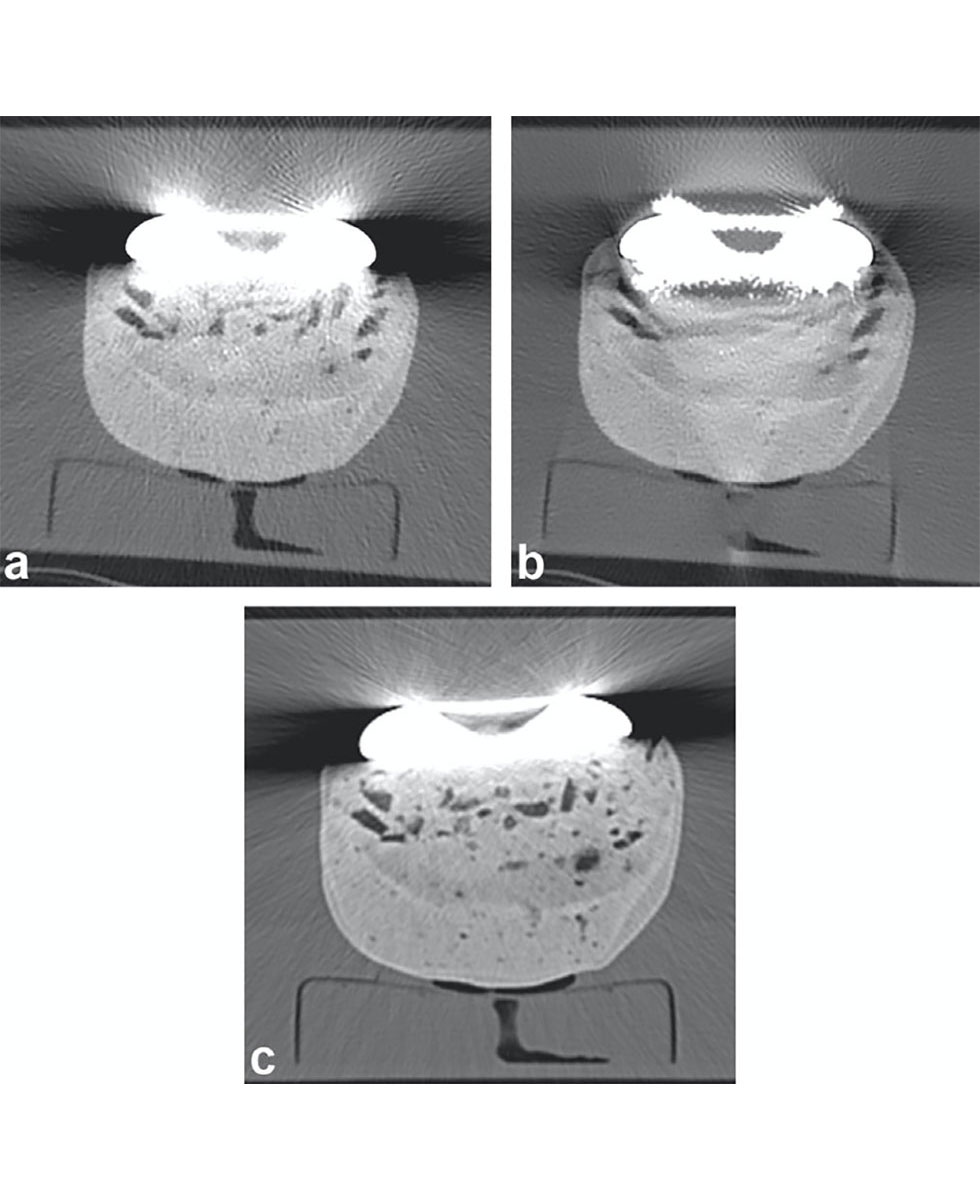 Figure 3: Outside appearance of our hip and knee CT phantom.

Figure 4: CT images of our knee CT phantom from two different scanners. The images from one CT scanner were made without (a) and with (b) using metal artefact reduction software. CT images from another CT scanner (c) show a clearly better image quality. 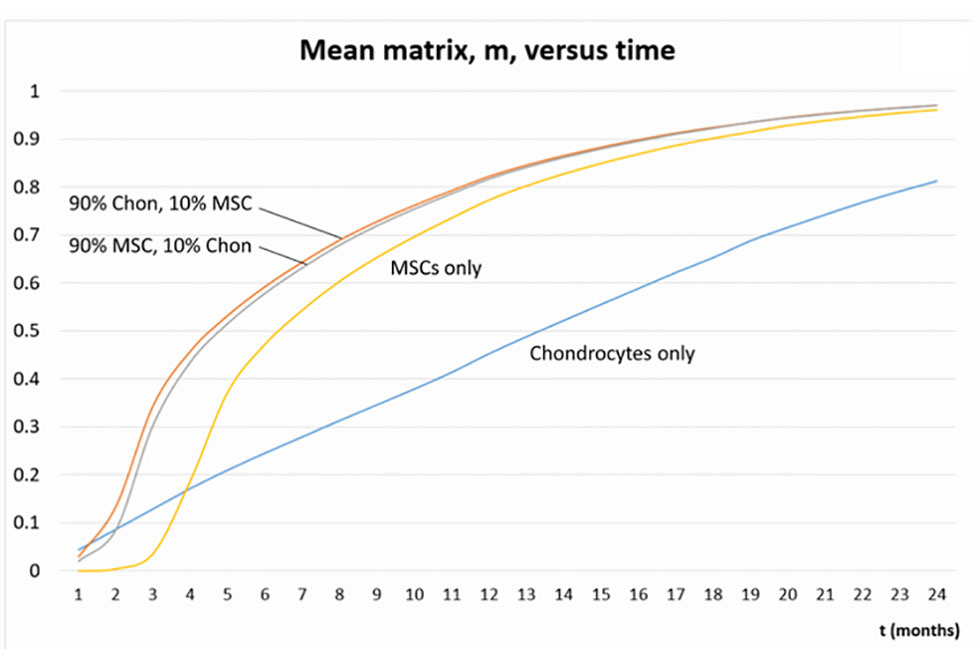