Funded by Versus Arthritis

As in all treatments, a few patients who have their osteoarthritis treated using biological approaches, such as cell therapies, osteotomy or microfracture, do not respond so well as others, though we do not know why. Our previous work has identified particular molecules in synovial fluid or blood known as ‘biomarkers’ that have the potential to identify which patients are unlikely to improve clinically following the cell therapy known as autologous chondrocyte implantation (ACI). These investigations focussed on protein markers whose biology is known to relate to poor repair of cartilage or general inflammation e.g. an enzyme, aggrecanase-1, and another molecule involved in the immune system, CD14. Our recent work, however, has used a highly specialised technique called proteomics to identify larger numbers of proteins which are altered within the synovial fluid in the knee of patients who either do or do not respond well to ACI. The proteins identified using this approach include many that have never been investigated before and which therefore provide attractive new candidates. To date, we have confirmed that four of these proteins, S100A13, MMP1, Complement C1S and MMP3, have the potential to inform us of whether or not a patient is suitable to continue through the ACI procedure. In addition, the MMP candidates have recently been validated in an independent group of patients using a different multi-plex discovery platform, providing added confidence to our results.

In addition, we have used ‘bioinformatic’ analysis, using complex computer programmes, to inform us of how the ACI procedure may be affecting different biological mechanisms, such as ‘acute phase response signalling’ in individuals who improve following ACI compared to those who do not (Figure 1). These studies may help us identify ways to improve ACI outcomes for patients in which it would not currently be successful.

We have gone on to see if any of these ‘biomarkers’ can help us predict what the outcome might be following other treatments, such as osteotomy or microfracture. We have shown that the amount of both S100A13 and the total amount of protein within the synovial fluid before an operation relates to the clinical functional scores that patients achieve a year after their osteotomy. We hope that this work will help us to identify a reliable panel of molecular markers which can be used to help the surgeon and patient decide on what is the best treatment for that particular person. This would not only save the health service money, but most importantly get people pain free and back to their normal lives quicker. 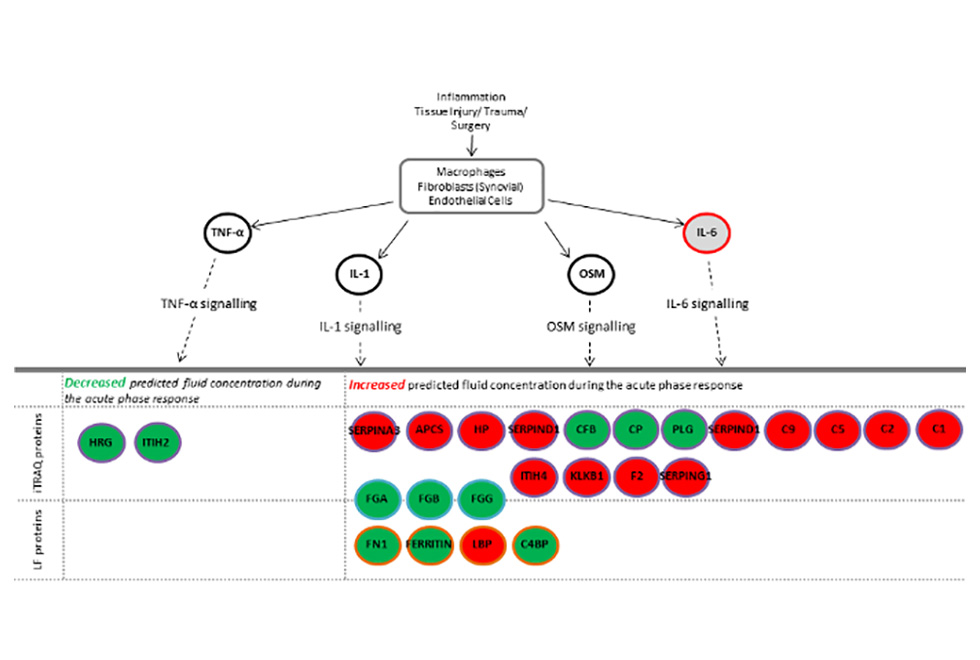 Figure 1. Acute Phase Signalling is an example of a biological pathway that is altered in people who do poorly following ACI. Proteins in red were increased and proteins in green were decreased following initial ACI surgery compared to pre-operative levels. This signalling pathway is therefore likely to be a good target for new drugs to improve the outcome for individuals who currently do not benefit from ACI.