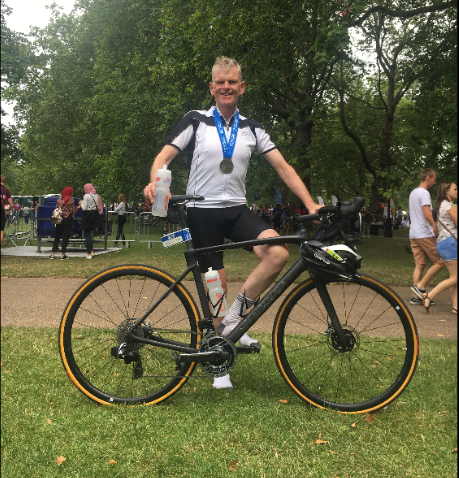 A 100 mile cycle ride has raised nearly £1,500 for an Oswestry veterans’ charity.

Nick McPhillips from Shrewsbury has so far raised £1,457.50 in aid of the Orthopaedic Institute Charity Veterans’ Research and Education Fund.

Based at the Gobowen Orthapeadic Hospital, the current veterans’ service is the first of its kind in the UK, is available to those who have served with the UK military, including National Service. It is led by Lieutenant Colonel Carl Meyer, a consultant military orthopaedic surgeon.

Cycling a total of 106 miles as part of the Prudential MyRideLondon 100 fundraiser, Nick completed his epic journey in six hours, nine minutes and 45 seconds, travelling at an average speed of 17mph and maximum 30mph.

Nick says he is pleased with the amount raised, and says there is more to come. “It was a bit lonely, but satisfying all the same,” said Nick. “I am really pleased with the amount raised too and there’s a bit more to come, so all good.”
Debra Alexander, fundraiser for the Orthopaedic Institute, said she was thrilled to have Nick’s support. “We cannot thank Nick enough,” she added. “His support means so much to our charity.”

If you would like to support Nick and help him to raise even more for this great cause please visit his fundraising page at uk.virginmoneygiving.com/NickMcPhillips

And if you would like to support the Orthopaedic Institute or for further information please contact Debra Alexander 01691 404561 or visit www.orthopaedic-institute.org